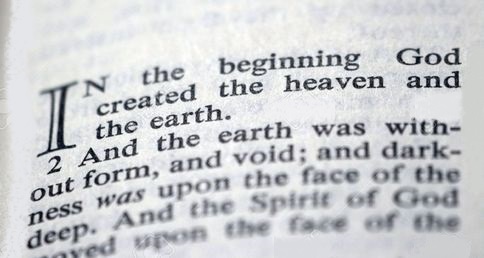 “Well.....not to be contrary or anything - BUT - since the Bible was not written in chronological order I don't see the need to read it that way. So many preachers put pressure on their people to 'read it through in a year,' and that always struck me as kinda silly. I say just open the Book and let the Holy Spirit take you where you need to go.

And besides, the bulk of my Bible 'reading' is listening to it on my phone. I get so much more out of hearing it then I do out of seeing it....

I READ and LISTEN....and firmly believe that God wrote the Book to be read in modules...because that's how it plays out....I think when people are shamed into reading it front to back it becomes a little monotonous and they only do it to be able to say they did it. To me, that's not really reading the Bible.

And besides - 'So then faith cometh by hearing, and hearing by the word of God.'"

The first thing that I would like to say is, audio or optical [“the eyes are the window to the soul”], whether it be a phrase, a sentence, a paragraph or the whole book, any form of Bible reading is good. No doubt, whenever and however you receive the light-rays of God's scripture deep down into your soul is definitely profitable.

The reason that I am making an article out of this issue is because I believe that you and OTHERS assume that it's okay to read THE BOOK in a helter-skelter fashion and not attempt to read it through from beginning to the end, as it was intended. (I wrote a book a while back, and, because I know people like to skip around in their reading, make it a point to tell them to, “please, read it from cover to cover” or they WON'T UNDERSTAND what I have written because they won't get the FULL picture.  Wouldn't it be the same with God's book?)

The first thing I want to address, is what you said in your first paragraph...

“[S]ince the Bible was not written in chronological order.”

Who told you that? That might be a half-truth or partial truth, but it's not accurate. While it's true that God grouped books of the Bible together like the Law, the prophets and the psalms (see Luke 24:44), but, if you study how the book is situate together, it's presented in such a way that, given all the possibilities that one could fathom, even though they are grouped in different groups, and there are some exceptions as to the chronology date of writing or historical date of occurrence, for the most part they are placed in chronological order. (For further reading, please, see my last chapter in this book...

God layed out His books the way He wanted, and you say, It's NOT good enough for me, I need to read them in “modules.”

I'm no scholar, but the little, feeble, study that I've done in this area proved to me that this supernatural “Book” is laid out perfectly. We not only have an Old and New Testament (notice the order), but in the New Testament we have the four Gospels (dealing with the birth, life, death and resurrection of Christ), the Acts of the Apostles (dealing with the history of the early Church and Apostles—as far as I can see, in order), Paul's writings (a little disjunctive, but grouped nonetheless together), the general epistles (that have an element of works to them, directed doctrinally to those in the Tribulation—after the church, those who are following Paul's writings, doctrinally, go out) and finally the Revelation that talks about the SECOND coming of Christ (the Gospels being His FIRST).

Read Ezra chapter eight with me, to verse eight...

1 And all the people gathered themselves together as one man into the street that was before the water gate; and they spake unto Ezra the scribe to bring the book of the law of Moses, which the LORD had commanded to Israel.  2 And Ezra the priest brought the law before the congregation both of men and women, and all that could hear with understanding, upon the first day of the seventh month. 3 And he read therein before the street that was before the water gate from the morning until midday, before the men and the women, and those that could understand; and the ears of all the people were attentive unto the book of the law. 4 And Ezra the scribe stood upon a pulpit of wood, which they had made for the purpose; and beside him stood Mattithiah, and Shema, and Anaiah, and Urijah, and Hilkiah, and Maaseiah, on his right hand; and on his left hand, Pedaiah, and Mishael, and Malchiah, and Hashum, and Hashbadana, Zechariah, and Meshullam. 5 And Ezra opened the book in the sight of all the people; (for he was above all the people;) and when he opened it, all the people stood up: 6 And Ezra blessed the LORD, the great God. And all the people answered, Amen, Amen, with lifting up their hands: and they bowed their heads, and worshipped the LORD with their faces to the ground. 7 Also Jeshua, and Bani, and Sherebiah, Jamin, Akkub, Shabbethai, Hodijah, Maaseiah, Kelita, Azariah, Jozabad, Hanan, Pelaiah, and the Levites, caused the people to understand the law: and the people stood in their place. 8 So they read in the book in the law of God distinctly, and gave the sense, and caused them to understand the reading. (Ezra Eight)

What other “book” do you take the liberty of only reading portions and sections where the author purposely laid out the chapters, or, in the Bible's case books and chapters in those books—the way He thought best, so you can read them in the order you choose?

The word 'book” is found one hundred and seventy-five places in the scripture. I challenge you to look them up. Hopefully, reading them, in context, will give you the same conviction that God gave me.

If, from the beginning to the end, the WHOLE volume is about Jesus, that's how it should be read.